Found this article on the Times Online, UK website. It contains an assessment on Arsenal's attack & defense based on data gathered by Fink Tank. I found it insightful & hope Gooners reading mOAm would too.

Efficiency drive in defence and attack is proving Arsene Wenger right
by Daniel Finkelstein
I know who you are are. I have your addresses. But don’t worry, your secrets are safe with me.

After Fink Tank published its top ten rankings last season, I received plenty of “feedback” from Arsenal fans. There was the guy who said: “Take it from me as an AFC season-ticket holder, Alexander Hleb’s inclusion invalidates your top ten list. I have never disliked an Arsenal player as much as I dislike the inconsequential Belarussian.” Your secret is safe with me.

And the reader who exclaimed: “I nearly choked on my cornflakes. How could you rate Hleb so highly? My hope is that, because your column is so highly rated, a manager might buy Hleb.” Your secret is also safe.

These days, of course, the feeling about Hleb is rather different at the Emirates Stadium. So what else can the data tell Arsenal fans about the club? In particular, why is this season going so well for their team? Dr Henry Stott and Dr Ian Graham have been investigating.

The starting point is that things were not as grim at the beginning of this season as some commentators suggested. The underlying data - goals, shots on goal – put Arsenal among the top four. The idea that Tottenham Hotspur were about to overhaul them was fanciful. From the start of the campaign, we always ranked Arsenal as having a strong shot at the title.

And now? Arsenal are still ranked third by our model, but they are, on the basis of points won, second favourites to be champions. We give Manchester United a 41 per cent chance of title glory, Arsenal 36 per cent, Chelsea 17 per cent and Liverpool 4 per cent.

For the past four years, our model shows Arsenal as an attacking team – at no point has their defence ranking been above their ranking for attack. One reason for their improvement this season is that the gap between their defence and Chelsea’s has begun to close and the decline in their attack in the second half of last season has been reversed. 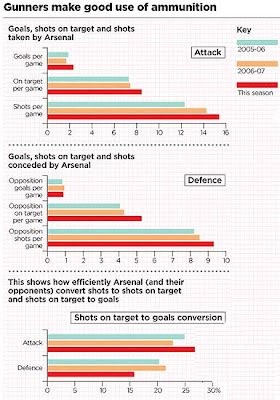 Let us drill down a bit farther. As the graphic shows, Arsenal are scoring more goals, shooting more and getting more shots on target, so their attack is improving in all departments. But their defence is different. They are letting the opposition shoot more, and shoot more on target. But – and it is a big but – they are letting in fewer goals.

As you can see from the conversion graph, what has happened is that Arsenal have become more efficient. They are converting more shots into goals and keeping a higher proportion of their opponents’ shots out of their own net.

Does this mean that Arsène Wenger, the manager, was right to sell Thierry Henry, the club’s prolific striker, and drop Jens Lehmann, the Germany goalkeeper? Well, first a word of warning – this could be down to luck because all these figures move up and down. but, at the very least, it seems that Wenger has not done the team any harm.

A critical reason was age. Wenger is right to put his faith in younger players. Henry, 30, was still a big asset when he played, but this was not that often last season. In any case, typically, 24-year-old strikers score 16 league goals per season, while 30-year-old strikers score only six. Lehmann’s age, 38, may also be a factor in his variable performance, which has been noted in the past.

And other attacking players were to hand. Robin van Persie added almost as many points per game to the team as Henry. And I have already mentioned Hleb. Not that I am saying I told you so, of course.