Thanks to colleague JF who organised his wedding dinner far south of Malaysia, NIA & I had our year-end outing in Johor Bahru. It has been a practice for me to end my working days for the year sometime between Christmas & New Year's Day.

Woohoo! The Gunners made a dream start to our home match against West Ham. Eduardo Da Silva scores within 2 minutes of the start. The Gunners need to be mindful of this team whose last match was a fightback from a goal down to win 2-1 against ManUre.
Most of us in the division who attended JF's wedding traveled to JB on Sat morning last weekend. The weather was good after it rained & rained for the past fortnite. We arrived at Naza Hotel at about 1pm after need to make a few turns while locating it. WNH's party had arrived a little earlier than us & were already at the restaurant ordering lunch. After checking in, we duly joined them for lunch.
Naza Hotel is apparently rated 3-stars. However, what welcomed us in the rooms were not (to my opinion) worthy of 3-stars, maybe 2-stars. The room carpets were dirty with stains & the bathroom had some dirt setting into the wall & bathtub edges. Luckily, the toilet seat looks squeaky clean. I also found out later that the shelves in the wardrobe were also not wiped clean & were covered with a layer of dirt (more layers on the edges), as I felt itchiness after wearing a t-shirt I left on 1 of the shelf.
Yeah, another goal! Adebayor scores with a bit of luck as his shot from a near impossible angle hit the post & spinned into the net.
Our 2 groups then discussed on the 'indah khabar dari rupa' situation of Naza Hotel & WNH's group decided to change hotel to Puteri Pan Pacific, where the wedding dinner will be held. NIA & I decided to stay as the conditions were acceptable to us. We believe that perhaps the hotel was recently purchased by Naza Group & they are in the midst of renovating the place. So, maybe cutting them some slack is justified. The rest of the afternoon was spent resting.
JF wedding dinner was held at the Persada International Convention Center located next to the Puteri Pan Pacific Hotel. In fact, there is a bridge connecting these 2 buildings. The dinner was an enjoyable affair with no delays what so ever. It ended a good 15 minutes before 11pm, the time that JF told us it would end. Me suspect ManUre & Chelski having games at that time got something to do with it. Hehehe. My only complaint is on the waiters & waitresses. Despite them being attentive to our requests, they seem to be rushing it most of the time. Our plates & the 1st few servings of the Chinese menu dinner were cleared in record time, even before we finished the food. Things got a bit better after I had a chat with the waitress serving our table. Hope she didn't spit in my food or anything as since our table was next to the wall of the ballroom, we could hear the waiters & waitresses bitching about those attending the wedding dinner, even about the smell of the perfumes worn that apparently was not pleasing to the nostrils of these young people.
On Sunday, we had a late buffet breakfast a the hotel restaurant. The spread was mainly local, with only toast, frankfruters & cereal making up the western menu. Local choices were nasi lemak, chicken rendang, fried noodles, fried rice & porridge.
We then headed to the nearby 'the Zon' duty free complex for some window shopping. We met WNH's group for the last time during our JB trip there. There were some good offers at the duty free complex, such as work shirts, but I've exhausted my wardrobe rotation budget to the Year-End-Sale. However, I did buy a foot design cushion for a bargain price. :) We had a later lunch at Danga Bay, a coastline area developed as a recreational site with restaurants, stalls & even a fun fair for all young & old. We drove around JB city before heading back to the hotel. Dinner was at a place called Restoran Zorro (go figure!). We had a group set meal with wedges & otak-otak on the side. 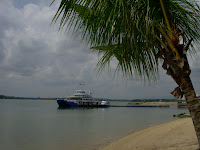 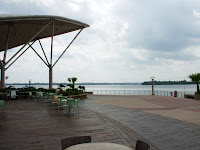 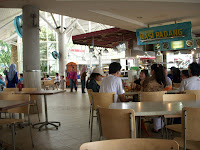 A final souvenir from the JB trip was a sore throat that I woke up on new year's eve having. As with most sore throat attacks, the body aches & a headache beckons too. It wasn't too bad, had paracetomol & lozenges with me & with a bottle of Livita, I was in good enough shape to drive back home. Spent the rest of new year's eve evening & new year's day recuperating from the sore throat.

Tomorrow, it's a the beginning of another calendar year working in the Organisation. Here's to a productive & successful working year. Kampai (Cheers, in Japanese)!