It has been raining rather heavily in the evenings & nites for the past few days. This evening was no different. As time approached 5pm, I could see thick dark clouds forming in the sky from the window next to my workstation. When I was about to leave at half past 5pm, it started to rain heavily. My instinct was to stay & go to gym. However, after remembering how heavy was the traffic at 8pm last nite when I went home (it was still raining) & traffic was still at a level that can be termed 'normal,' I decided against staying back.

True enough, traffic was moving & I reached Klang in what can also be termed 'normal travel time.' There were of course deep puddles of water that I drove through without much problem. Today that action did create a problem with my trusty Iswara. The car horn short circuited (for the lack of a better term) after I used it like twice this evening. Out of the blue, it started blaring, first for a short while, then in long intermittent periods. I thought it was the car behind me initially. You see, my car horn has been 'shy' for a year or so now. 'Shy' in the sense that at times, it won't sound when I press the horn button & it's loudest is what some people press on their car horn button lightly. So, it occurred rather late to me that it was MY car horn that's making noise. However, other drivers (luckily) didn't really notice as the horn sound was partially drowned by engine sound & I managed to drive to a car accessories outlet without drawing too much attention.

Replacing the car horn cost me nearly RM100 for a decent set. Could get a cheaper set for around half the price but the outlet people told me that it's of low quality. Despite me not wanting this unplanned car expenditure as I need to undertake a major service plus some parts replacement for the Iswara due, amongst a few big things I will be spending on in these few months, I do not want to be changing the car horn again before say, 2010. So, now the Iswara blare with more gusto & I joined NIA & her sisters for dinner at McD (that was a few doors away from car accessories outlet, thank God) before heading home.

Now, as I mused this posting, heavy rain has resulted in a flash flood outside the house. Water level has risen alarmingly to the extent that it started to come into the hall. Bathroom & toilet are also flooded. Proton Wiras (a car of this model tried to drive along the flooded road & was almost stuck, had some neighbours not persuade the drive to reverse back & go via a different route), Perodua Kancils, Kelisas & the likes are in danger as water reached the based of the cars. Again, I thank God as the Iswara has a higher profile. I hope the water doesn't reach the base of my car, as that would mean the house would be flooded too. 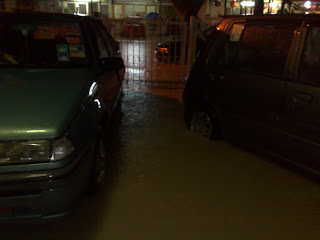 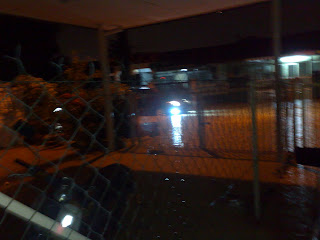