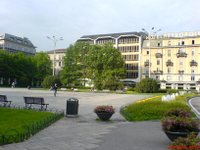 We woke up on the 5th day in Italy with the realisation that we are about to begin the last leg of our journey. Destination: Roma, with a few hours stopover at Milano (need to change trains anyways). As we march on to catch an early train to Milano Centrale, we managed to catch one last view of Lake Como in its sunny glory.
“Don’t know when I’ll be back again, oh babe I hate to go…” 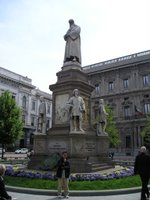 At Milano, we headed for Galleria Vittorio Emanuele in the Piazza Duomo, reputed to be the world's oldest shopping mall. One of me mates has an item from shopping list to settle here, orang kirim punya. Being 1 of the fashion capitals of the world, you can find many bling-bling outlets here, like Prada, Armani & LV. Situated in Piazza Doumo is the Duomo di Milano, a particularly large and elaborate Gothic Cathedral. A short distance from it stands Leonardo's monument in Piazza della Scala. I pondered below it for a few minutes, yet still couldn’t solve Da Vinci’s Code. Caught a glimpse of Castello Sforzesco (Sforza Castle) on the way back to Milano Centrale for the 1500 train & 5 hour ride to Roma Termini.

Our lodging in Roma initially left us horrified. The hostel appears crowded & cramped with no sight of the private rooms like what we requested. Thankfully, the management has 2 hostels under the same name & we were told they had private rooms at the 2nd location that was not publicized on their website. As such, if you were looking for some cheaper yet acceptable B&B style hostel, you may wanna check out Dino Hostel at Via Napoleone III. The hostel here (compared to Dino’s at Via Giovanni Giolitti) appears more homely with the added friendly canine security who responds to the name Igor. The presence of a kitchen allowed us to finish our stock of Maggi instant noodles for dinner.

One of my mates & me planned to spend our single day in sunny Roma strolling around in sandals (me in the ¾ khakis I brought along & a pair of Reebok sandals purchased at FoxTown). Alas, our plan was dashed as BBC predicted cloudy with light showers weather for the day. :( Since all of us have visited Roma previously, we didn’t rush to visit the multitude of places to see. Our day was spent in the area bordered by Piazza di Spagna (Spanish Steps is here), Piazza Navonna, Campo de Fiori, Monument of Vittorio Emanuele II aka Altare della Patria (Altar of the Nation) aka "Il Vittoriano" & Fontana di Trevi.

Campo de Fiori, according to Wiki means "field of flowers," is a market selling fresh veges, fruits, flowers & souvenirs, among others. Despite its literal meaning, I can attest that there are now field of flowers, but there is a fountain in the area (as with many places in Roma).

Piazza Navonna, a famous square, houses 3 fountains, the most well known probably is the Fontana dei Quattro Fiumi (Fountain of the Four Rivers). Am told by a Dan Brown fan that this fountain has some significance in Angels & Demons. Situated at this piazza too is a toy shop that sells dolls that are not meant for kids to play with (unless of course, the child happens to be the offspring of some wealthy bloke).

We also visit several shops selling leather goods around Pantheon, Fontana di Trevi & the adjacent areas. Price comparison is a must to ensure one gets a good deal. These shops even offer name/initials engraving services (some free of charge) for purchases from of their ware, wherever possible. 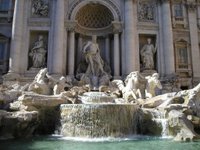 On my 2nd visit to Fontana di Trevi, I decided to throw another coin into the fountain. An Australian bloke who was also staying at Dino’s commented the coin throwing legend of Fontana di Trevi must have some truth in it as I threw a coin into it last Dec 2005 & here I am back again 6 months later. Hopefully, the portion of the legend on love will come true for me too, discounting the fact that from what I just read while completing this blog posting I may have not done it correctly. :D Khurafat, khurafat… 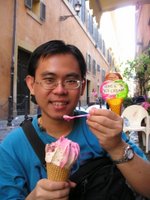 near Pantheon. Call it 3rd time lucky, as we had passed it twice earlier only to find the store not opened. However, as we were walking from Fontana di Trevi to Campo de Fiori to find an outlet of Blue Ice gelataria that is not crowded with people, we found Gelataria Artigianale opened for business. By then, the sun shined after an afternoon of rain & cloudy skies. Hence, I helped myself to 3 scoops of yummy gelato on a cone. Itadakimasu (sorry, don’t know the Italian equivalent to ‘makan’ or ‘bon appetite’)! :D

Dinner on our last night in Italy was pizza slices (sold by weight) & a portion of lasagna, courtesy of a pizzeria near Roma Termini station that sells Halal food.
“Now the time has come to leave you,
One more time, let me kiss you,
Then close your eyes, I’ll be on my way
Dream about the days to come,
When I won’t have to leave alone,
About the times, I won’t have to say…”
Final dawn in Roma, we were all up by 6am. With just 3 bathrooms & easily 5 times as many people staying at Dino’s, we were not taking any risk being late due to the queue at the shower. I was the 1st to leave as my flight to Luton Airport, London was the earliest. With heavy heart, I bade farewell to my mates & headed for Ciampino airport.

Arrivederci, Italia. Grazie for the memorable esperienza, the beautiful sights & the time with ameno signorina.