If you must know, the posting title is the Malay translation for Wild Hogs, as per movie subtitles. 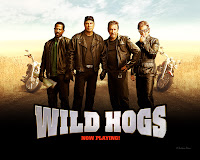 It all started over our daily morning routine - breakfast under the bridge aka 'bawah jambatan' on Wednesday this week, me having roti canai & steamed bun while WNH was eating half boiled eggs & toast (the Chinese stall there makes yummy steamed bread & toast). As she read the day's Sun, she commented about wanting to watch Wild Hogs, a comedy movie that's currently showing at the local cinemas. I wasn't planning to go to the gym for the 3rd day in a row this week due to my then sore & aching right arm, hence as ked her "Wanna go watch it this evening?" Well, she agreed. :)

We sorted out the details on where to watch the movie & what time subsequently. So, at 1702, we shut down our laptops, cleared workstations & proceeded to my car. We managed to arrive at Cineleisure Damansara around 1735 (including finding a place to park my car) & had ample time to queue for tickets & buy popcorn & drinks. I was mostly guided by WNH around Cineleisure as this was my 2nd visit there, the 1st was also a movie trip to watch Casino Royale with another colleague last November.

The cinema looks nice. The seats design different from TGV, GSC & MBO cinemas & there are more twin seats than GSC. In Cathay Cineleisure cinema, the twin seats are basically like the last 2 or 3 rows where each pair of seats, the center arm rest can be folded up, where as the GSC twin seats are positioned apart (hence less of them in a particular cinema) & more cosy than the normal seats. Cathay Cineleisure popcorn is yummy too, somewhat better than TGV's yet it still cannot beat GSC's. I don't like MBO's popcorn. Oh, I must also point out that the popcorn set combos in Cathay Cineleisure have a funny name (to me) for their medium sized set - Lovers Combo. I don't see what's so lovey-dovey for a set of 1 medium sized popcorn & 1 medium sized drink. Shouldn't a lovers combo be like a bigger sized popcorn with 2 drinks? Me think somebody in marketing there thinks sharing somehow equates to loving together. Hmm. Hence, I found myself asking for a 'medium sized combo, please' & having to reply 'err, yes' when the guy manning the counter confirmed, 'oh, you want a lovers combo, sir?'

On to the movie. The comedy is about 4 suburbanites who are best mates. They spend their free time riding around in their big bikes & collectively calling themselves Wild Hogs. Each of them however, have their own personal problems in their daily lives & appear to be getting frustrated at it. One of them (Travolta) suggested they go on a road trip i.e. really getting some miles on their bikes. Although initially hesitant, the others finally agree. So, of they went on the trip, not before disposing their cellphones. I cringe a bit during that scene ( those beautiful phones). Without spoiling the plot, misadventure follows all the way to the town of Madrid (still in the US of A). These include burning tent, skinny dipping, real biker gangs, hot chili dish, a bull & a big 'boom.' All in all, it's an enjoyable movie. I actually laughed so hard during a scene that my throat ended itchy. The most interesting character has to be Dudley Frank, played by William H. Macy. From him, I am reinforced in my belief that voice commands for computers & cellphones have a loong way to go (alternative text = alternative sex ?!!). Oh, do stay for the end credits as the series Extreme Makeover: Home Edition makes an appearance then. I told WNH during the movie that I am inspired to buy a cub-chai bike (why? Coz my driver's license don't allow me to drive big bikes. 250cc the most). :)

Alrighty then, it's getting late & I wanna catch some zzz. Before that, gonna feed Kiki 1st. She's meowing outside my room. Good nite.