It's wok computers have become...

There's a thing in my pocket,
You can see the lump,
It ain't a growth,
Yet it blew a hole in my other pocket,
It screams, it shouts, it sings,
Yet it has no voice,
It can record great pics with it's eye,
Store them in memory,
Yet it cannot see,
It can also help me find my way,
Yet it has no knowledge of direction,
I can make it perform many tasks,
Yet it has no intelligence to learn,

There's a thing in my pocket,
Yet it's not one thing,
It better be more things,
Coz it was my January splurge of the month. 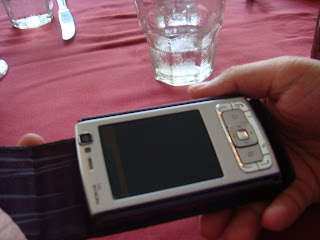 I was taken into upgrading my N70 after seeing how possible convenient it is having a wifi enabled device (which I do use in wifi enabled places such as at home & at the office's cafeteria area) as well as a GPS enabled baby, even more so after Fer Bear got her P3600i. Well, this gadget does have assisted GPS. At the end, even after considering HTC or some other PDA phone, Nokia still ends up being my choice, primarily as the N95 has all the stuff I needed at the price I wanted. It would have made my day had this baby included a qwerty keyboard and/or touch screen, but those are really just icing on the cake.

I also chose the N95-1 over the N95-2 aka N95 8Gb as I value the availability and convenience of the microSD card slot that the N95-2 remove in view of it's large internal memory. Further, I dare not risk the lack of a camera lens cover (which the N95-2's designers have removed) knowing that the device will be in my pocket with my keys. With the phone software upgrade to version 20, it appears that some of the issues previously experience by early adopters of the gadget were address. So, to those wanting to get any of the Nseries devices, alwiz update the phone software 1st before customising and using them.

I am enjoying the experience thus far. The N95 has stereo speakers and the 5 megapixel camera is handy too. Phone network reception is good with clarity during call. I just need to get used to slider phones as previously, I stuck to the candy bar form factor. I have experience the phone 'hanging' with the removal of battery required a few times in order to restart the N95, but these incidents are rare.

If you are thinking of getting any of the newer Nseries, I say go get what computers have become.