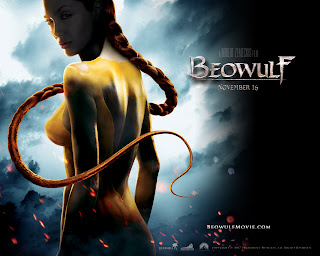 Thanks to the local Nokia Nseries 'My Nokia' website, I was able to get 2 free tickets to attend a screening of Beowulf on 13 Nov 2007, 2 days before its general local release.
Heading to the cinema after work, I was caught in heavy traffic. A 30-45 mins journey in normal traffic ended with me taking just over 90 mins to arrive at the shopping mall where the cinema is located in. It didn't help that I had to attend a meeting at 4pm (was only informed of the meeting on that morning itself since the email notification was sent @ 1935 the day before, well after I left the office @ 1915) that lasted about 2 hours. Yes, I left the Organisation 1 hour later than expected & arrived @ the shopping mall 1 hour later similarly. Luckily, the movie screening was at 9pm, & I was able to have dinner without rush.
This 2007 Beowulf movie is based on an Anglo Saxon heroic poetry that was recorded on an untitled manuscript. The language in the manuscript is Old English.
Quoting the wikipedia article (I am feeling lazy on summarising the plot & the Wiki paragraph on it appears concise & aptly worded to me), 'This adaptation of Beowulf tells the story of a Heroic Geat who travels over seas to come to the aid of Legendary but drunk King Hrothgar to help rid the people of Heorot of the monstrosity known as Grendel. But by defeating Grendel he incurs the wrath of his evil yet seductive mother, without any scales and claws. Told to kill the mother by Hrothgar, Beowulf enters her cave and becomes the latest victim in a century old tradition of deceit and destruction that has sentenced many kings and their kingdoms to misery and death.'
The movie itself is just about 2 hours long. The USA rating is PG-13. Hence, I was surprised that the local rating of U was applied to it (Shiowch who watched the movie with me states that since it cannot be 1 of the other 3 18-ratings, so U it is) but just after we exchanged comments, a PG-13 notification flashed on the screen. Hehe, no issues then.
Beowulf 2007 is actually a computer generated imagery (CGI) film. A similar but perhaps not really same film that comes to mind is the Final Fantasy movie, both the Hollywood produced & Japan ones. However, for Beowulf, it is not entirely CGI but rather real actors acting & filmed on a motion capture stage. The film is then altered/animated. So, if 3D animated movie ain't your cup of tea, do give it a miss & don't bother buying the DVD. Just wait till it's shown on satellite TV or you get to watch it during a flight or something. I found it watchable & enjoyed the CGI (not just Angelina Jolie). :)
On a final note, this review was started like a day after I went for the movie screening but never got about finishing it during last year. Hence, I apologise for the abrupt end to this review.