Shelling out for a Ferrari 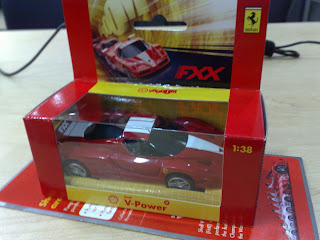 This is the closest I'd get thus far to playing with a Ferrari car.

The previous set of 6 model Ferrari cars from petroleum corporation Shell last year, I managed to collect them all despite starting a bit late from the time the cars were offered. To buy a model car, customers would have to purchase a certain amount of Shell fuel 1st. With NIA's help, I even managed to eventually even get 2 of the Enzo Ferrari model that was elusive to me in the beginning.
This time around, 7 model Ferrari cars are being offered. However, they each cost more than those of the previous set (albeit with better engine sound apparently) & one needs to pump even more Shell fuel to qualify to buy the model Ferraris. I don't plan to collect the entire set (simplest excuse: where to store them?) but had my eyes on the FXX Ferrari model the moment I saw it in the cover of the Sun newspaper yesterday. Since I am now a mostly Petronas patron (despite Shell being my 2nd choice of petrol for my Iswara), no thanks to CIMB now not giving points for petrol purchases, & also due to my Maybank Petronas Visa card, how to get that model car?
Luckily Izzy, a colleague, uses Shell petrol for her Satria Neo & had to fill up her car's tank yesterday evening. So, with her kind help, I am in possession of the FXX Ferrari model car you see above. Shall open the packaging & have a 'drive' with it tonite. *grins* Lastly, based on the brochure Izzy got together with the model car, there are 2 more Ferrari model cars available to buy only via a Shell Helix engine oil purchase. Talk about promoting your products, Shell. :P
Till later, live long & prosper.
Mused by Mark at 09:16