Well, not really sunny, but the weather is just nice this morning, as compared to yesterday's downpour of rain that resulted in flash floods & badly congested traffic. 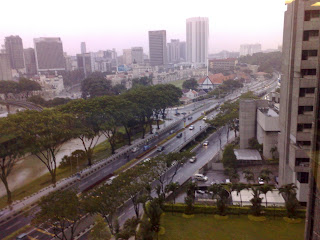 I left home yesterday for work at 0625, 5 mins earlier than my normal expected departure time, yet I arrived at my parking spot in the office at 0740, even by using the NKVE to supposedly cut short my travel time. This would be the arrival time if I left home after 0630 but before 0640. Yes, people, I actually figured out these estimations to ensure I am at the office before 8am on most days, best estimate + PRAD + risk charges & all. The photo is the view from my workstation at 8am yesterday. I guess since most people were stuck in traffic getting to KL, the roads seem clear. However, 30 mins later, it was the usual morning jam.
Today, leaving home to work at expected departure time, I arrived slightly earlier than expected. The traffic getting out of Klang was less congested at that hour of the day & the Federal Highway traffic flow was smoother than usual. Ahh, bliss! A good start to the day that allowed me to layan my sudden craving for chee cheong fan at 0730, which I duly had for breakfast at our food court medan Kupang.
Have a productive day ahead.
Till later, live long & prosper.
Mused by Mark at 08:01