During this lunch break, after using wikipedia to find out what is a gizzard (it all started thanks to HP's lunch meal) since most of use only know the Malay word for the thing (pedal) & having a round of banter among us actuarial division members, I sat to listen to some songs over winamp while surfing the internet.

After visiting a friend's Friendster profile, ended up checking up me friends' blogs for updated postings. Opened MOAM by mistake (clicked too fast on my Google Toolbar bookmarks). Looking at MOAM while winamp was playing this Japanese song, Shinkai no Kodoku (The Deep Sea's Solitude) by Houko Kuwashima (a somewhat melancholic character theme song from the anime Gundam Seed Destiny), I felt that I needed to spruce up MOAM. And so, dear readers, I present you with yet another layout for MOAM. 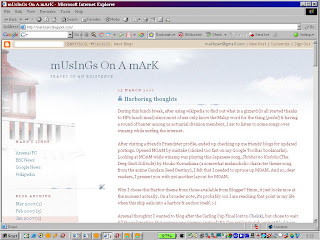 Why I chose this Harbor theme from those available from Blogger? Hmm, it just looks nice at the moment actually. On a broader note, it's probably coz I am reaching that point in my life when this ship sails into a harbor & anchor itself. :-)

Arsenal thoughts: I wanted to blog after the Carling Cup Final lost to Chelski, but chose to wait till the redemption that never came (sorrow instead) FA Cup replay match against Blackburn Rovers. On the Carling Cup match, it was a good show by the Gunners Kids. My 1 regret was that it should have been Cashley Cole getting the sock & lying on the ground instead of Wayne Bridge. HAHA. The sucker punch against Blackburn was not unexpected, especially since the Gunners were missing chance after chance in front of goal. Well, at least a victory against Reading at Emirates helped bring some small optimism ahead of the must win 2-0 match against PSV at Emirates this week. If not, us Gooners will only have the 3rd or 4th place EPL fight to look forward to.

GTG. Back to work. On the final note, it's Stars Are Blind by Paris Hilton on winamp now. Hubba2. :-P