I am suffering. Not just physically (I have a really sore throat that resulted in a fever as well as runny nose), but also mentally as a Gooners.


After beating the Scousers in an EPL league game at the Emirates earlier in the season, as well as 2 consecutive Anfield cup ties (1 of them is a 6-3 trashing, starring Julio Baptista), the Gunners are currently on their way to conceding 3rd place to Liverpool as they are trailing the Scousers by 2 goals (current score 3-1) at Anfield. Argh, no! Crouch just completed his hattrick as I was just about to upload this posting, 4-1! It's really painful to watch, especially after losing to fellow Scousers Everton in the last EPL match (which thankfully I decided to sleep rather than endure the pain). Despite what Arsene thinks, I add my voice to the chorus of Gooners pleading for the purchase of a few experienced player to boost the Gunners' future bid for silverwares.


Anyhow, last weekend was much better. Spent it with friends including my girl on a trip to highlands. Thoroughly enjoyable as we visited a Japanese setting, a botanical garden, a French-like resort & played with rabbits. Have a look of me with 'wabbit.s' :-D 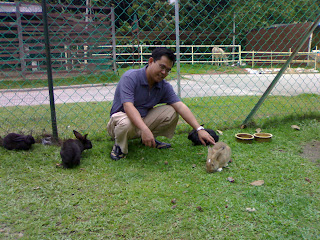 On the way home on Sunday, made a brief visit to the City of Entertainment. As I expected, the highlands are not as cold as they used to be. Still, a fun visit though. Perhaps next time, I'd be luckier in getting balloted for a room at Awana.