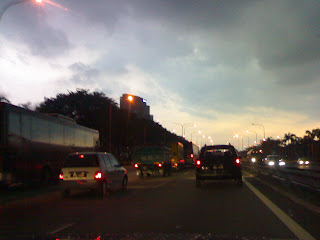 This was the view front the front & driver's seat side mirror of my car, taken at 7pm on 21 June 2007 during heavy traffic entering Klang town. Yup, it was only 7pm & Maghrib was like about 1930 then, yet the sky was enveloped by dark clouds that remind me of some sci-fi movie where invaders were coming or a scene from a natural disaster movie.

Since last Friday, it has been constantly raining in the afternoon & at this time yesterday, dark cloud were seen again & it started raining very heavily, or in fact, a storm came. Rain subsided after 5pm. *sigh* I can already hear raindrops falling down. Hopefully, this improves further over the next few days as I plan to do some travelling. I just took this pic, which is the view from the window next to my workstation, a few minutes ago: 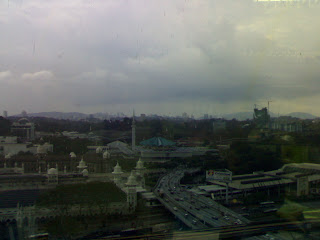 That's it from this brief interlude from work.

Guppy update: Gup still hasn't returned by the time I arrived home late last nite. Tried to stay up & wait for her a bit but my eyes couldn't take it anymore by midnite. Will go home earlier today. Harap2, she didn't go merayau the moment she felt slightly better. Just don't want her to get ill again. Plus, she still needs to take her medication.